Mahishasuramardhini, Goddess who killed the buffalo-demon,  is worshipped throughout India.

Shiva, Vishnu and other gods presented Durga with their respective powers to overcome Mahishasura. In this image, she is shown holding Vishnu’s attributes Chakra and Shanka (Wheel and conch shell) and Shiva’s attributes Trishul (Trident). 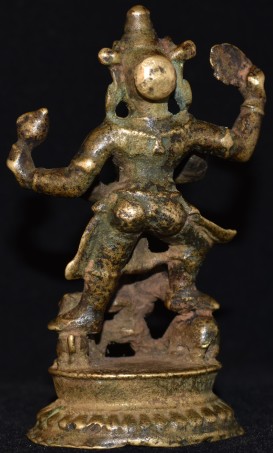 Buffalo’s head is seen in the front and the goddess is about to plunge Trishul into the Mahisha’s chest. Mahisha has a sword drawn in his right hand. The goddess is resting her right leg on buffalo’s body and the left leg on her vahana, lion.

Unlike other images, Mahishasuramardhini images are for full of vitality and movement. See the dynamic aspects of the emergence of the demon from buffalo’s body with a sword being drawn, trident about to be plunged into demon’s chest,  and the lion gnawing at the demon.

This is from Orissa. Crown in the form of a tiara, circular base with beaded rim and the form of the conch shell are typical of Orissa bronzes. It is about 9.5 cm tall. This probably dates prior to 17th century.

Below is an example Mardhini, called Jay Durga in Orissa. It is about 18 cm in height and estimated to be at least 500 years old. The idol is in worship and the photo is a home shrine. The photo was provided by Sidharth, associated with Puri Jagannath temple.