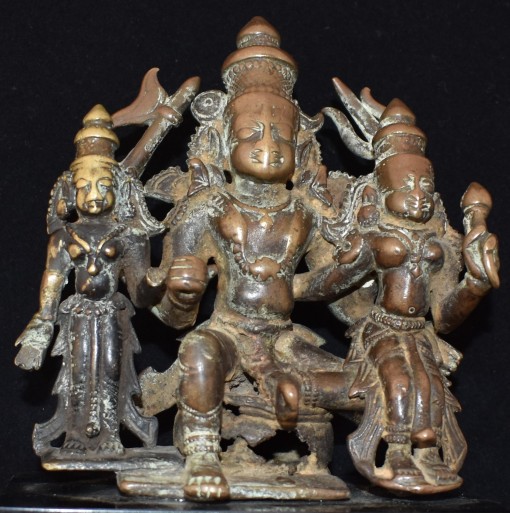 This is Uma Maheshwara, Siva with his consort Parvati, and an attendant. Siva is identified by battle axe and Trishul in his rear hands. The attribute of his front right hand is missing. His left front hand makes a weak attempt to hold Parvati. As compared to Siva, Parvati is holding Siva firmly with her right hand. There is a lotus bud in Uma’s left hand.

This is a semi-classical/folk bronze. The form and Trishul are the indications. Rarely do you see Trishul in classical bronzes? 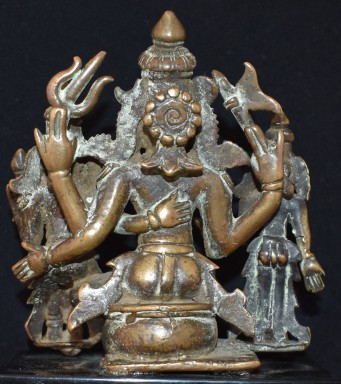 The way Siva is seated, off centre on the thin base, suggests the attendant is part of the original design and not a later addition.

One interesting aspect of this bronze is the difference in the material used for Uma Maheshwara (rich in copper) and for the attendant (brass). In our thinking, copper is considered to be superior to brass and this example may reflect that thinking.

As usual, the back is worked on. Like it is typical for South Indian bronzes, Parvati’s size is comparable to that of Siva.

For a folk bronze, this is well sculpted. It shows significant ritual wear.

This bronze is about 12 cm in height, without the base. This is probably from North Deccan. This bronze may date prior to the nineteenth century.