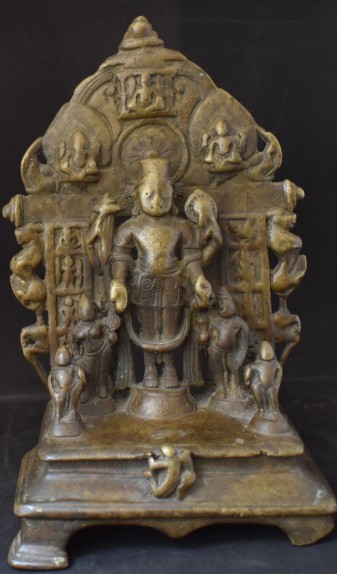 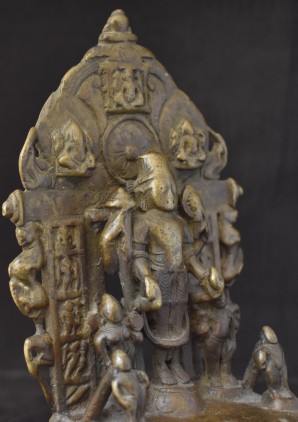 Vishnu is standing in Sampada and he is holding  Lotus, Gada, Chakra and Shankha in his hands. Clockwise starting from his lower left hand. The Lotus is quite worn, but the protrusion above his palm is the remnant of the lotus. The eyes, forehead mark, nipples and necklace are inlaid with silver. Vishnu is flanked by a female on his right and a male on his left.

They may be personified attributes Gadanari and Chakrapurusha. Not quite sure though, as the female figure on his right appears to be

holding a Chakra. It is Chakrapurursha, a male, who personifies Chakra. In front of these three figures, there are two more figures and they look like male attendants. That means in this idol, Vishnu is shown without his consorts. On this count alone this is a very unusual bronze. (Please see the note dated 25th June 2019)

The presence of Avatars makes this bronze a very special one. Avatars listed bottom to top. On the right side, the Avatars are Matsya, Varaha, Vamana (umbrella), Rama (bow and arrow) and seated Buddha. On the left, the Avatars are Kurma, Narasimha, Parasurama (axe), Balarama (ploughshare) and Kalki (horse). Please see the side views.

At the base in the centre is Garuda. And instead of the usual static pose in Anjali Mudra, here Garuda appears to be in flight.

This idol is about 18.5 cm in height. It is most likely from Central India and may date to the Pratihara period (9-11th century of the common era).  The Kalasa, Buddha as an avatar, flat crown, presence of other deities on the top portion of Prabhvali are some of the indicators for the region and dating.

The two figures in the idol, subject of this blog and the enlarged picture shown, has similar features and characteristics. My earlier attribution may be incorrect. If Garuda is the figure on Vishnu’s left,  who is that in the front at the centre of the base?