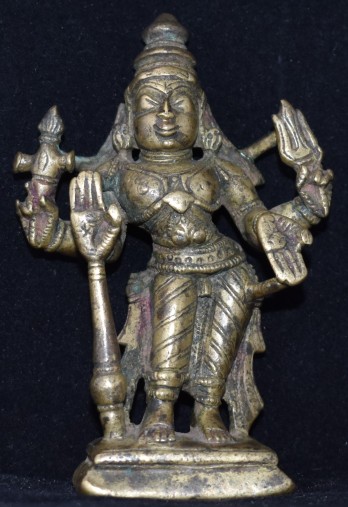 This is Harihara, syncretic form of Vishnu (Hari) and Siva (Hara). In some literature, the reference is to Sankaranarayana (Shankar: Siva and Narayana: Vishnu). The concept of syncretic deities is ancient.

One common view among the authors is syncretic deities were worshipped to reconcile the differences between the sects.  According to R Champakalakshmi, in Vaishnava Iconography in the Tamil country,  ‘ It is not a mere attempt at reconciliation or rapprochement between two rival sects but it shows a blending of two concepts in a newly conceived iconographic form based on tolerance and mutual respect and goodwill in the religious thoughts of two creeds’.

The bronze is about 8 cm in height. The right side is Vishnu as identified by the conch in the upper right hand and Mace supported by the lower right hand. The left side is Siva with the upper left hand holding Trishul. The lower hands are in Abhaya(protection) and Varada(bestowing) mudra. The book referenced above lists six variations of attributes held.

Normally the right side is Siva and the left side Vishnu. The interchange of sides is irrelevant to the concept or the objective. There are no other noticeable differences between left and right sides.

Harihara, in this example, is wearing  Kiritimukuta, necklaces, earrings, armlets, anklets, waist girdle, wristband and full-length dhoti (lower garment). Notice the side flares of his dhoti. He is also wearing Sirachakra.

Few features worth noting. The mace (Gada) is jammed in the position rather than held in hand. Conch and Trishul are held in the hands rather than in fingers. Harihara is supposed to be standing in Samabhanga (with a straight lower body) and here he is in exaggerated Tribanga (triple flex form).

The spurning suggests the bronze is from Karnataka region and the ear ornaments suggest Maharashtrian influence. Kind of puts in the Northern Deccan region.

There is some wear to it, possibly due to ritual use and looks to have been cleaned. It is unlikely to be earlier than the 19th century.

Harihareshwara temple in Karnataka and Sankaranarayanan Kovil in Tamil Nadu are among the better-known temples of Harihara.