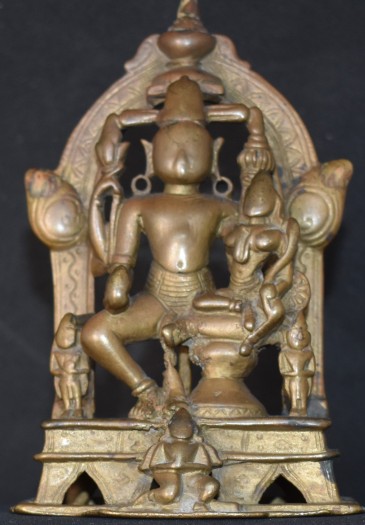 This Vigraha, Vishnu with Lakshmi seated on his left lap is normally referred to as Lakshminarayana. Narayana is another name for Vishnu.

Vishnu is sitting in Lalitasana, at ease with his right leg hanging down, with Lakshmi seated on his left thigh. Vishnu is holding his Shankha (conch), Padma (lotus),

Gada(mace) and Chakra (wheel). Clockwise starting from the lower right hand. The Chakra is visible left of Lakshmi, just above the attendants head.

Lakshmi is holding a lotus in her left hand.  Lakshmi herself is known as Lotus (Padma). Lakshmi’s right hand is holding Vishnu. Lakshmi is also sitting in Lalitasana, mirroring Vishu’s position.

When Vishnu is shown with his two consorts Lakshmi is normally on his right. When he is shown with one consort it is always Lakshmi and invariably seated/standing on his left.

There are attendants on either side of Lakshminarayana. Vishnu’s vahana Garuda is in front, on the Peetha.

This icon is probably from Gujarat suggested by the use of brass, design of the peetha and the way the deity is braced to the Prabhavali.  This vigraha is about 12 cm in height and meant for home worship.  This vigraha may date to the eighteenth century or earlier.