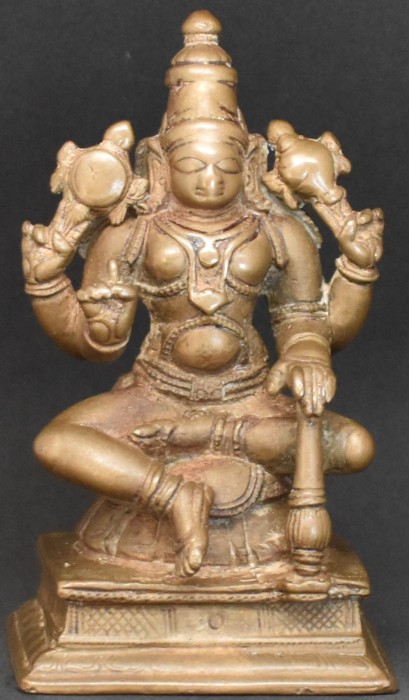 This is Visvakesana, a Vaishnavite figure. He is Vishnu’s army chief, keeper of Vishnu’s treasury, an obstacle remover and the guardian of gates to Vishnu’s abode, Vaikuntha. As a remover of obstacles Visvakesana is to Vaishnavites, what Ganesha is to Saivite. But that seems to have changed over a period of time, as Ganesha is invoked and worshipped by Vainshanvites, in the capacity of obstacle remover. See Dhatr-Surya(?) image on this site. 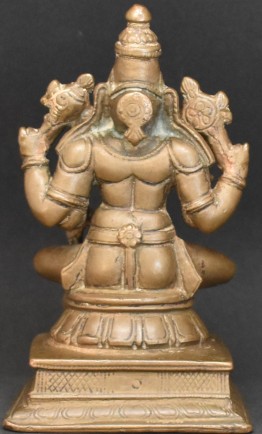 Here Visvakesana is holding Chakra and Shankha (Discuss and Conch shell) in his rear hands and the left front hand is supporting Gada (Mace). Based on these attributes one could be lead to think the bronze is seated form of Vishnu. One of the noticeable differences is the tarjani mudra of his front right hand. The raised index finger, a threatening gesture, goes with his role as guardian of gates and army chief. Other indications are the absence of sacred thread across his chest (see the back view) and the absence of Srivatsa mark on the right side of his chest.

In Vaishnavite temples, Visvakesana normally has a separate shrine, outside the main deity’s enclosure, and sits facing South. As in here, he normally sits in Lalitasana, with his right leg hanging down and left leg folded and bent towards the right leg.

In some literature, Vishnu is referred to as Visvakesana adding to the confusion. R Champakalakshmi in her book Vaisnava Iconography in the Tamil Country, mentions a version of Visvakesana with ploughshare instead of tarjani mudra. So far I have not come across that version.

Note the little projection in front on the peetha to support the mace.

This bronze is about 11.5 cm, seems to be most popular height for Visvakesana bronze. There is considerable ritual wear to the top portion. Compare front and back views of Chakra and Sankha. This bronze may date to the eighteenth century.

This bronze is most likely from Karnataka. Visvakesana images are mostly from South India.