This is Sarabesha, a destructive form of Siva, as a man-lion-bird with eight legs and a pair of wings. Sarabesha in his rear hands is holding Siva’s attributes elephant goad (Ankusha) and antelope. His front two hands are tearing the abdomen of the prostrate figure.

The prostrate figure is Narasimha, an avatar of Vishnu. He is identified by the attributes in his rear hands discuss and conch shell (Chakra and Shankha). The other hands are in Namaskara mudra (It is Sashtanga Namaskara but for the fact, he is on his back). The posture suggests total surrender rather than just worship or seeking forgiveness.

This is a sectarian sequel to Ugra Narasimha, the avatar Vishnu took to punish the disbeliever Hiranyakasipu. As per the story, after destroying Hiranyakasipu, Narasimha continued his destructive streak and his fury threatened the entire universe. When the Gods approached  Siva for help, he took the form of Sarabesha, a mythical animal ( a combined form of man-lion-bird), and tamed Narasimha.

This mythology is from Tamil Nadu, South India. There is a sequel to this story and that at a later date.

The bronze is only about 6.5 cm in height. This bronze is from Tamil Nadu. The book Manifestations of Siva by Stella Kramrisch has a similar bronze (page 121, Cat no 99) and it is dated to the fifteenth century.  That example is from Worcester Art Museum (try searching for ‘Shiva’).

This bronze is one of the best in my collection and I suspect it will retain that position. The detailing, drama, action, emotions and the form are out of ordinary. Let the photos do rest of the ‘writing’. 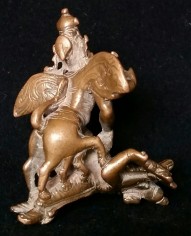