One more Ganesha. This one riding on his vahana, a large rat. The rat measures 10.5 cm end to end. 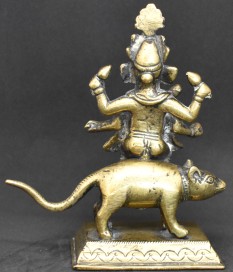 Ganesha is four armed and his rear hands are holding lotus buds. His lower right hand is holding a spherical object and lower left had a flat object, maybe Pustaka (manuscript). He is sitting with his legs pendant. His trunk is turned to the right, an auspicious sign.

This is made of brass and it looks to have been polished.  The bronze is about 11.5 cm in height. There is some ritual wear and it may not date prior to the nineteenth century.

It is not often you come across a Ganesha riding his vahana, rat, of this size.