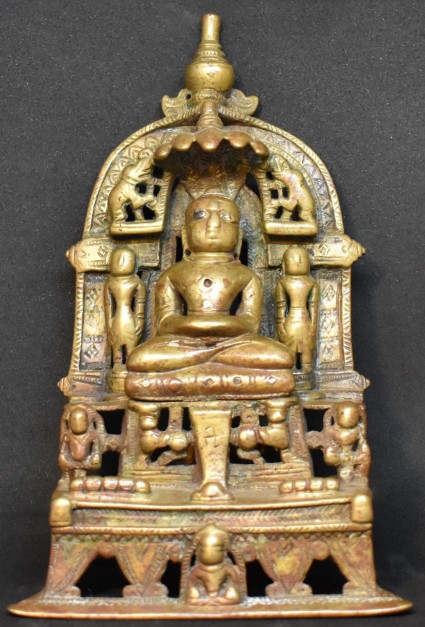 This is Suparsvanatha, one of the twenty-four Jain Thirthankaras. The identification is based on the Swastika symbol below him, in between the two lions, and the five-hooded cobra providing him with a protective canopy.

This bronze is from Svetambra (white-clad) sect of Jainism, as opposed to the Digambara (sky-clad) sect. The presence of clothes can be seen by the marking on his arms, around the neck and on his torso.

Here Suparsvanatha is seated in Padmasana with his hand in Dhyana mudra. He is flanked by two attendants. Above the attendants are elephants. This reminds me of Gajalakshmi.  In between the elephants is a five-hooded cobra, one of the identifying features of Suparsvanatha.

At the next level below, you see spherical objects and they are meant to represent planets. The number seems to have varied over a period of time.  Below that level is a seated figure and he is not identified.

Among the features to note are inlaid eyes, extensive incised patterns and the way Suparsvathana is attached to the base and prabhavali.

The back has extensive inscriptions and they are yet to be translated.

This bronze is from Gujarat and it is about 17.5 cm in height. This may date to the sixteenth century. The estimate of age is based on an auction catalogue listing similar bronze and with the similar pattern of the spherical objects.