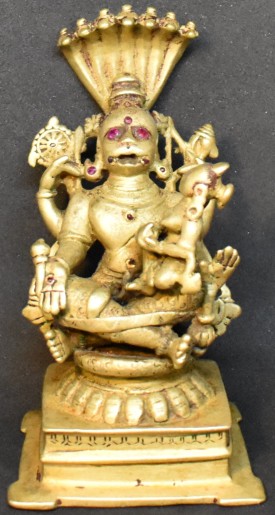 Here Lakshmi Narasimha is seated with Yogapatta, the thick band holding his legs.  This is sometimes known as Utkutika Asana.  Narasimha is one of the avatars of Vishnu. Lakshmi is sitting on his lap. Interestingly  Lakshmi is looking at Narasimha rather the devotees. Narasimha is protected by a seven hooded snake. His seat is formed by the coiled body of the snake.

What makes this bronze bit more interesting are his attributes. In his rear right hand, he is holding discuss (chakra) and his rear left hand is holding a bow and shell (shankha). Bow, called Sharnga, is a documented attribute of Vishnu. The arrow is in his right hand and it is between the Chakra and his right ear.  But his holding bow and arrow are unusual. His front right in Abhaya mudra and appears to be holding a lotus. His left front hand anchors mace to the ground.

The snake base is supported by an inverted lotus base and which in turn sits on a rectangular pedestal. His eyes, mouth, palm, forehead and navel would have some semi-precious/precious stones/metal inlaid. This is in addition to the inlaid stones in ear-rings, necklace and chakra

The related iconography of Lakshmi Narasimha holding Chakra and bow (instead of conch/shell)  is Karanja Narasimha from Ahobilam in Telugu speaking area.  Ahobilam is home to nine different Narasimha temples and it is believed it is here Narasimha killed Hiranyakasipu. Thanks to SM for the information.

In Bhadra Narasimha temple, Ernakulam there are bronzes with similar iconography (Chakra and bow). Thanks to AK for pointing this one.

The above iconography is mentioned in the book The Iconography of Vaishnava images in Orissa by T E Donaldson (page 131). As per that book, this iconography (Chakra, bow, Utkutika pose, Lakshmi on his lap) is prescribed in Skanda Purana. As per AK, Narasimha Tapaniya Upanishad documents the above iconography.

In the book Sculptural art of Hampi, by S K Suresh, there is a photo of (Figure 51) Lakshminarasimha holding a bow and something else, possibly a conch,  in his left backhand, as in the example here.

This bronze is about 12.5 cm in height and it shows wear and age. This may date to the nineteenth century or earlier. I have seen similar examples (with Chakra, bow and shankha) with dealers. This is from the North Deccan area.

4 June 2018:  Replaced the earlier image with a better bronze and better picture. This is what the vendor had to say: “I have got it from the person from the Karnataka near Jamkhandi. I bought it from the Otari ( the village craftsman). Actually, this piece initially came to him from the owner who used to worship this for generations. Later for some reason, they wanted to replace this with newly crafted similar Narasimha. Hence they have made the same identical piece through a wax model, of the original one and handed over the original to Otari in exchange for the new replica.”

It is surprising how little I had to change the original description for the new image.