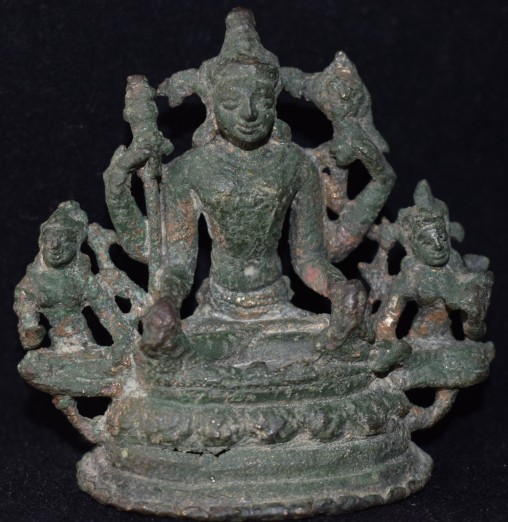 This is Vishnu with his consorts Lakshmi and Saraswati. All three are seated in padmasana. Images such as these, Vishnu seated flanked by seated consorts are less common compared to the Sthana (standing variety). All three are sitting on Lotus. The consorts’ pedestal set a lower level and is supported by stems coming off the main pedestal. Notice the pedestal having single lotus, as compared to double lotus which more common in Nepal bronzes.

Vishnu’s attributes in lower hands are indistinct and maybe Shankha and Chakra. The rear hands hold Gada and Padma.  Consorts attributes are lost or damaged.

This bronze is about 6.5 cms in height and is damaged and crusted, probably a result of long period of burial. It is likely to have come from Bengal region.

A similar bronze of about the same size, 7 cms,  is in LA County Museum of Art.Refer P. Pal’s Indian Sculptures Volume II page 201, Catalogue no 100 e and that bronze is dated to about 12th century.

In South India Vishnu’s consorts are always Sri Devi and Bhu Devi. Saraswati is associated with a god, it is Brahma.

In Eastern India, the associations seem to have varied over time. According to N K Bhattasali ” The worship of Brahma fell into disuse and Saraswati was generally assigned to Vishnu as his second wife”. Page 180-181 of Buddhist and Brahmanical Sculptures in Dacca Museum.

According to the above paper, during the Pala-Sena period (Eight to the thirteenth century) Vishnu images were created with Lakshmi and Saraswati as the consorts of Vishnu, following or setting Eastern Indian convention. 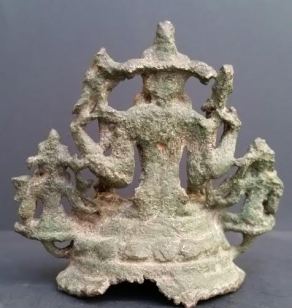