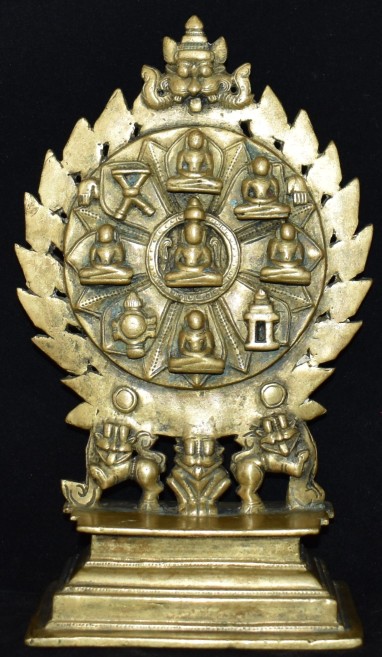 This is Navadevata (Nine Gods) or Nava Pada and it is from Digambara (Sky Clad) sect of Jainism.

The central figure and the four in the cardinal directions represent Panca Paramestis ( the five Supreme ones), Arhat, Siddha, Acharya, Upadhyaya and Sadhu. According to U P Shah in Jaina-Rupa-Mandana, the central figure Arhat represents enlightened Jina. The top Siddha represents all other enlightened souls, the right one Acharya the monastic leader, left Upadhyaya the monastic preceptor and the bottom Saddu represents all other monks and nuns. 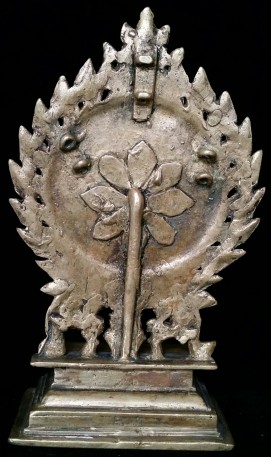 The remaining four dignitaries are  Dharma Chakra (Wheel of the Sacred Law), the Sruta (the Speech/Scriptures), Caitya (Jina image) and the Caityalaya (The Temple of the Jina). In the clockwise order starting from the lower right.

There are the nine worthies of the Digambara sect and considered to represent the virtues of Jainism. They are the Devadidevas (Gods of Gods) and superior to all other objects in Jainism.

Notice the Kiritimukha, lotus at the back, lions supporting the Nava Devata, squatting lion at the centre, two hands along the ring and the multilevel pedestal. The tassels on the Dharma Chakra reminds one of such tassels in Vishnu’s chakra.

This bronze is from North Deccan and it is about 19 cm in height. It probably dates to the post-Vijayanagar period but prior to the nineteenth century.