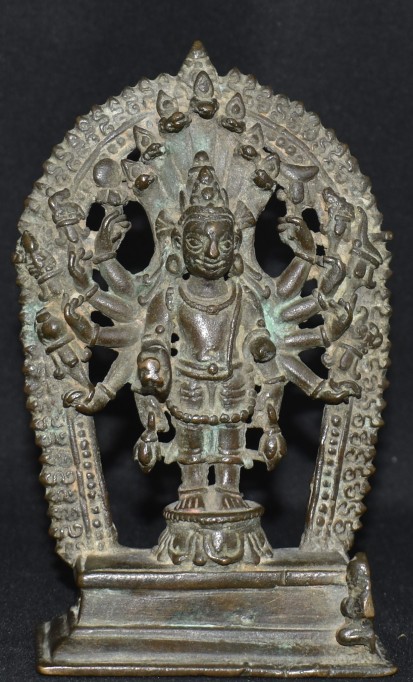 This twelve-armed deity is a syncretic one. But defies identification of all the deities represented. The book The Sensuous Immortals by Dr P Pal has an example and he had tentatively identified the deity as Siva-Balarama (Catalogue item 55: Page 93). In fact, that is the only other example I have come across. This blog uses narration in the above reference.

From the attributes, one can infer it is a syncretic form that involves Surya (Lotus), Shiva (Mirga, Rishabha), Vishnu (Lotus, missing conch shell, Garuda), a solar deity (Sun and Moon), Bramha (water pot) and Balarama (Plowshare).

Features to note include the packed-design of the prabhavali, the donor image on the pedestal, Vanamala, the three-leaved crown and the unworked back.

One of the interesting features is eight side-arms hold lotuses and the attributes are supported on the lotuses. Unusual indeed.

This Vigraha is about 12 cm in height. Going by the example mentioned earlier, this Vigraha may be dated to the tenth century and attributed to Bihar (Kurkihar style).

Note: Please take time to see the high-resolution main picture. Suggestions on the identification of the attributes and/or the deity are most welcome.