The scene is Brahmapurisvara Temple, Pullamangalam. My visit to that temple was prompted by very strong recommendations from a Stapathi I met in Swamimalai.

It is a very early Chola temple and the current structure, well most of it, dates back to the tenth century. As a place of worship, its history dates back even further to the 7th/8th century. 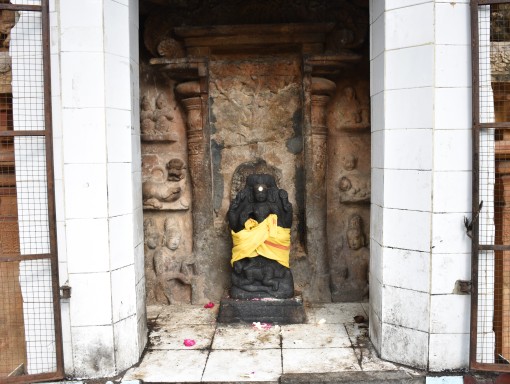 The story is about the above Kosta Vigraha, Dakshinamurthy. Picture above. Kosta Vigrahas are sculptures, almost in the round, placed in the niches on the outer walls of the main temple.

As you can see in the picture the reddish-brown wall is the original structure. The white-tiled walls and floor, the iron grill and more importantly, the black granite sculpture of Dakshinamurthy are recent additions. Post the 1950s and we will come back to that later.

Behind the draped Dakshinamurthy,  you can see a tree (Asvatha tree) on the wall under which Dakshinamurthy sits to espouse knowledge. Parts of his Jatamukuta is also seen. The photos, on the sides, show what is left of Dakshinamurthy’s hands and attributes. Rest of the sculpture is missing.

James C Harle, in his book The Brahmapurisvara Temple at Pullamangai (published 1958) talks about this niche being partially blocked with masonry and his sighting of the tree. 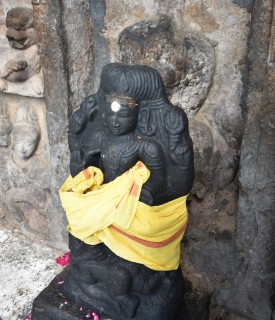 Post-1958 some well-meaning devotee(s) has filled the space with the sculpture and has provided protective walls and grills. The result is, the original stucco and granite structure is obscured by the ceramic tiles and what is left of the original deity is blocked by the new sculpture.

The initial damage may be an act of vandalism or just an act of time.

The second act, structure built since 1958, was obviously driven by piety. Well-intentioned of course.  But to me, the building of the ceramic-tile structure is an act of vandalism.

What do you think?