Pilichandi is sometimes known as Pilichamundi as well. This is one of the spirits worshipped in coastal parts of Karnataka (Bhutaaradhane/Kola) and northern coastal Kerala (Teyyam). The origin of this practice centres around Tulu speaking people.

Here the spirit in the form of a rider is wearing an elaborate headgear and apron around his torso and waist, called Ani, is on the tiger. In Tulu region, spirits which are worshipped are called Daiyvas and they are one notch below Vedic gods, Deveru. This hierarchical classification makes no material difference to the way Daiyvas are approached, worshipped by everyone with deference and is subject to elaborate ceremonies.

Pilichandi, researchers believe is of totemic origin and this spirit is in

voked in Bhutaradhane (kola) to ward off the menace of tiger and other wild animals to cattle and crops. Pilichandi is categorized as personified tiger rather than the deification of warrior who subdued tiger.

The rider would have held a sword (right hand) and a bell( left hand). Normally they are cast separately and hence usually get lost. The rider’s face looks as if he is in trance and it is in line with Bhuta Aradhana rituals.

This may be from Tulu region as opposed to North Kerala. The headgear and the material lead to that suggestion. 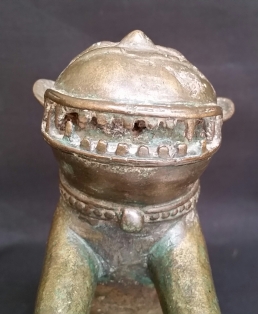 This is a two piece construction and the tiger is cast rather stiffly with an exaggerated head. This is about 29 cm in height. This may be from the 19th century.

Sita K Nambiar: The Ritual art of Teyyam and Bhutaaradhne 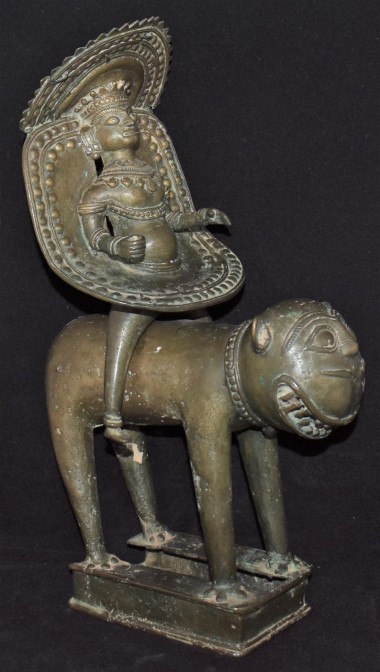