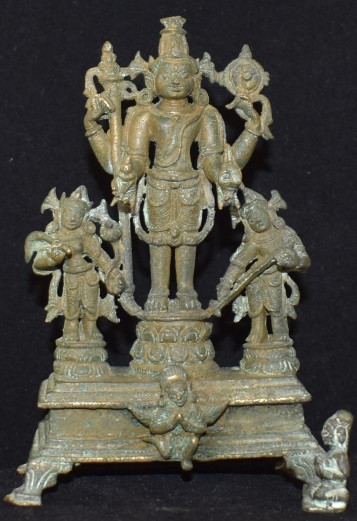 The above is a typical representation of Vishnu and his consorts in Bengal (including current Bangladesh) and Bihar areas during the Pala regime. Pala kingdom reigned that region between tenth and twelfth century. Several bronzes and stone sculptures of this form exist.

Here Vishnu is holding lotus, mace, discuss and conch in his hands. Starting from lower right hand in clockwise direction. This form of Vishnu, based on the order in which he is holding the attributes, is called Trivikrama. This classification is as per Agni Purana. (Pratapaditya pal, Indian sculptures Volume II) . This name is not to be confused with one of the avatars of Vishnu, Vamana or Trivikrama. This composition is one of the most common forms in Bengal during Pala period.

Vishnu is standing on a dou

Vishnu is standing in Samapada (no bending). A typical position for Vishnu, virtually a Pan-Indian feature. Postures of his avatars is a different story. Lakshmi and Saraswati are standing in the Tribanga pose.

Unlike most of the bronzes from South India, here the bronze is assembled and not cast as a single piece. The back view shows that. Another difference is the back is not worked on, as normally devotees do not see back.

This bronze has lost the prabhavali. Its height is 11.5 cm. This may date to the 11th century.

18 Aug 2018: Have come across a reference to one example of Vishnu with Sri Devi and Saraswati. The photo below is from the book ‘Catalogue of selected bronzes, wood carvings and stone sculptures – Art Museum Trivandrum’.