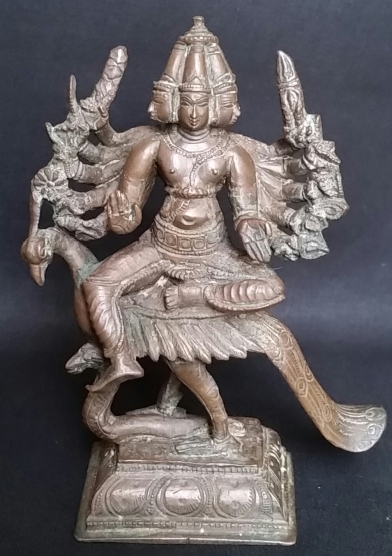 This is Kartikeya, son of Siva and Parvati.  Here Karthikeya is shown with six faces and twelve arms riding his vahana, peacock.

This image could be called Arumukha or Shanmukha (who has six faces), Dvadasakra (who has twelve arms), Dvadasaksha (who has twelve eyes), mailerivelan (the lancer who is mounted on a peacock), Karthikeya (nursed by the six Karthika’s, Pleiades) by virtue of the features. This is in addition to his other names Andi, Saravana, Velayuda, Murugan, Skanda, Kandaswami, Tarakarjit, Gangeyan.

The story of his birth varies depending on the texts, Puranas. But it i 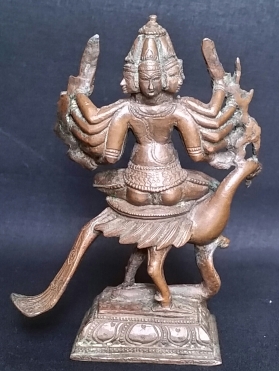 Each of the six faces is sculpted with care and has individual crowns and it has a finial bringing all the crowns together. Compared to other bronzes, the ornament is sparse, just crown, necklaces, channivara, waist band, chest band and wrist bands. Ornaments like arm bands, shoulder hara and anklets are missing.

Each of his arms is holding distinct attributes and they include Sakti, arrow, sword, discuss, noose, bow, shield, conch, plough, double vajra. His front arms are in abhaya (protection) and varada (boon giving) mudra.

In this form, riding a peacock, Karthikeya is widely known all over India and these days his worship is more common in South India. He is known as a warrior god and is the commander-in-chief of Shiva’s army of devas. Hence the name Devasenapati (Devas general).

The complexity of the piece and the quality of work is worth noting. Notice Karthikeya’s dhoti (lower garment) and the folds are cast in place rather than chiselled or incised after casting.

This bronze is about 12.5 cm in height and is most probably from Tamil Nadu. There is no ritual worship related wear and deep patina. This may not date prior to the nineteenth century and may even be from early twentieth century.