This miniature Mahishasuramardhini is just about 5.6 cm in height. But packs a punch with its features.This form of Mardhini is called Asta Bhuja, eight handed deity.

The arms are carrying varying attributes trishul, arrow, (?), sword, shield, bow and bowl. starting from lower right hand clockwise. Her lower left hand is holding Mahisha by his hair and pulling him out of buffalo’s body. The severed head of buffalo is in front of the goddess, between lion’s feet and Mahisha. Her right leg is on her vahana, lion. She is pinning the buffalo to the ground with her left leg.

For additional information on Mahishasuramardini refer to the bronze from Orissa or the reproduction bronze.

Two things worth noting. The back view shows Goddess’ hair plaited and it runs all the way to her rear. Delightful work. Even more significant is what is there on her crown. The top of the crown is shaped like a Linga. See the back view and the photo below. Truly remarkable.

The concept of Goddess carrying Linga on her head as an iconographic feature of Mahalakshmi is well known. Several such examples exist. In Mahishasuramardini, this is my first.

S K Ramachandra Rao, in his book Pratima Kosha Volume 3 page 49, refers to such Mahishasuramardhini, carrying Linga with Yoni on her crown, as Tulaja Bhavani. There is also a distinct and totally different deity Tuljapur Bhavani.

This bronze shows significant ritual wear and may date to the eighteenth century. This is from Western Deccan region. 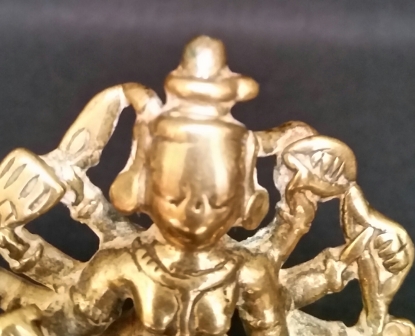