This composite Vigraha made up of 6 parts, shows Shiva and Uma riding a Rishabha, Shiva’s vahana. The deities are framed by a prabhavali. Shiva is holding Ankusha and Mirga in his rear hands. 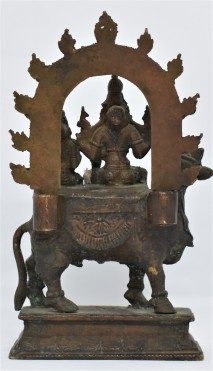 Siva and Uma on their own would have been referred to as Umashaita. If their son, Skanda, is standing in between them, then they are Somaskanda. Here riding  Shiva’s vahana they are referred to as Rishabeshwara.

The vigraha depicts a processional scene, as the Vigraha include the vahana. The Vahanas tend to be made of different material, usually lighter material, than that of Utsavmurthis.

This is probably a pilgrim pice and meant for home worship.

This vigraha is, most likely, from Tamil Nadu or from the bordering regions.  There is not much ritual related wear. This may not date earlier than the nineteenth century. The Vigraha is about 13 cm in height.

Below is a Rishbeshwarar mural from Thanjavur Brihadeeshwara temple.

10 Feb 2020: TVMalai Raja pointed out this Vigraha is better known as Rishabaruda Moorthy. The distinction is Moorthy is used when Siva is with his consort Parvati and Eshwara when he is on his own.