This is seated Ganesha with two attendants holding fans.

Four armed, elephant-headed Ganesha is accompanied by his vahana, a rat, shown between his right and retracted left leg.

This is folk in nature, see the way Ganesha’s hands are sculpted. Ganesha has two fully formed tusks and normally one of them is broken. The broken piece is usually held in his lower right hand. As usual, Ganesha is holding a sweet in his lower left hand and his trunk is reaching for it with his trunk.

Ganesha is sitting on an elevated platform, giving him the height advantage over the standing attendants.

The back view shows the prabhavali covering only Ganesha and not the attendants, confirming the relative difference in their status.

Bronzes of Ganesha with attendants are not common and I have come across several paintings with such iconography. For one such example refer to this painting from Brooklyn Museum.

The material and ‘find spot’ suggests this is from North Deccan (North Karnataka/South Maharashtra).

This bronze is about 8 cm in height. This may date to the nineteenth century or a bit earlier.

13 Dec 2018: Found this example on Karan’s FB pages. It is from Wageshwar Mandir near Pune. The styling and attributes are different. But comes from the same region. 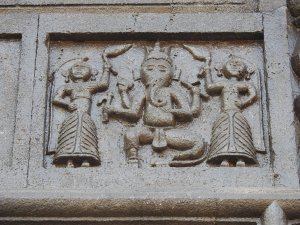