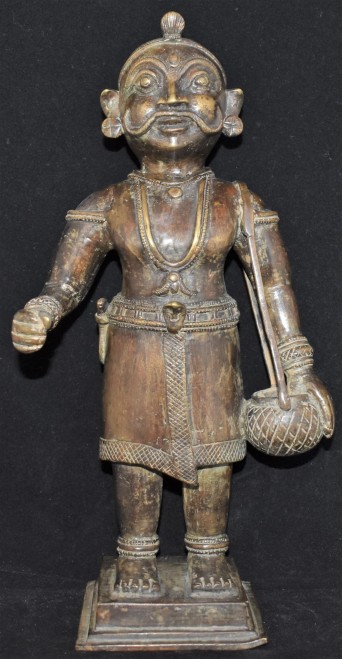 This is Muthappan, Siva as toddy tapper. A folk deity from Northern Kerala. The attributes identifying this bronze as a form of Siva, include third eye, cobra hood in the belt and Sarpakundala (ear ornaments shaped in the form of Cobra). See the close-up image for details.  Wikipedia provides several version of the folklore surrounding this deity as well as the temples where he is worshipped.

He is a proud man, well decorated, muscular and fully equipped to carry out his business as a toddy tapper.

Incidentally, toddy refers to as” an alcoholic beverage created from the sap of various species of palm tree such as the Palmyra, date palms, and coconut palms” (Courtesy Wikipedia). Kerala region is abundant with coconut palms. Toddy tappers are the ones who climb coconut palm trees to cut flowers of the palm tree to extract its sap.

Starting from his tight cap, a container for toddy on his left and sickle knife tucked at his waist, he is fitted for the job. Thick moustache, rugged body and big head highlight the physical aspect of his job.

The ornamentation, necklaces, armbands, wristbands, decorated belt, anklets highlight the special aspects of him. The long necklace with tiger claws (protective charm)  as a pendant is noteworthy. Strange it may seem, tiger claws are worn by Brahminical deities as well. See Navneetha Krishna. The robust size of the ornamentation reinforces the presence.

His Mundu (short Dhoti – lower garment) is special as it has decorated borders. Normally such Dhoti’s are worn on special occasions. Here it is worn by a special person, Siva.

The class of the artist shows up in the way Muthappan is holding the toddy container in place with his left thumb inside and slight misalignment of mundu (lower garment) in the front. Realistic portrayal.

As it is normal with South Indian bronzes the back of the bronze is worked with the same diligence as the front. Note the chains, tight-fitting cap with the patterns reproduced, belt and the pattern on the dhoti’s border, toddy container decoration, the anklets…and the little protrusion on the cap.

The rich ornamentation is in striking contrast to his not wearing footwear. And so is the pleasant expression on his face compared to the robust physique.

The thick eyebrow and formidable looking moustache remind one of Bhuta masks from that region.

This bronze is about 28.5 cm in height and it may not date prior to 19th century.

This is and will remain a favourite in my house.