This is Durga, holding Chakra and Shankha (Wheel and conch shell) in her rear hands. Her front hands are in Varada and Abhaya mudra (Boon bestowing and protection). 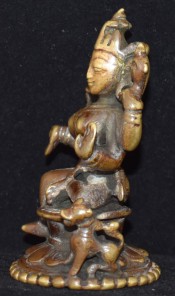 Durga is sitting on a round pedestal with lotus motif on the base and she is sitting in Lalitasana, with her right leg pendant. There is a lion on her left, her vahana.

Here Durga is identified thru her attributes Chakra, Shankha and her vahana lion.

Complex crown, with tiara like form defining the edge with the crown rising above it, a beaded rim of the base, chakra design (hole in the middle) and ear ornaments design point to Orissa as the place of origin.

There is significant ritual wear and it may date to the 18th century or so. This Durga is about 8.7 cm in height. At some stage, this bronze was coated with a protective layer and it shows in the front view.

In the photo to t

he left, Mahishasuramardhini, published earlier is shown along with Durga. The comparison of features and form helps us in confirming the place of origin.

The photo to the right shows two Durgas. The Durga with prabhavali, from Deccan plateau,  has already been blogged. The photo shows how the feature of the deity varies by region or indicate how the local deities are assimilated into Hindu Pantheon.

20 July 2019: The photo to our right is Vaishnavi from Orissa. It has been in worship for over 500 years. Interesting to see the consistent iconography. Thanks to Siddarth for sharing it with us.