This is Umamaheshwara, one of the forms of Siva and Parvati. Goddess Parvati is seated on the left thigh of Siva. Lower Left hand of the Siva is stretched over and holding Parvati’s waist. Parvati’s right hand is wrapped around Siva’s waist. Siva’s rear hands are holding battle axe and antelope. The lower front hand is in Abhaya (protection) mudra. Parvati is holding a lotus in her left hand. 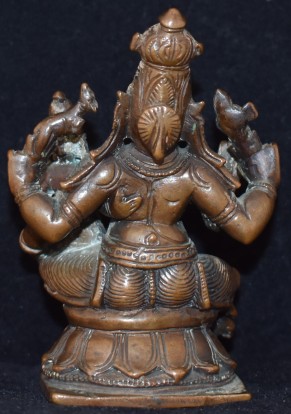 Siva is seated in lalitasana, with his right leg pendant. Parvati’s legs are pendant and are resting on a lotus pedestal.

This icon may be from Tamil Nadu. But the physical features of Siva, esp torso region, suggests it could be from Karnataka. Well not too long ago, some of the arts of Karnataka belonged to Tamil Nadu (Madras Presidency).

It is about 7.5 cm in height and is meant for worship at home.

One surprising thing I noticed is the rarity of Uma Maheshwara, as in the above form showing possessive affection, from Tamil Nadu.

I also checked my standard reference T A G Rao’s Elements of Hindu Iconography and there are no examples of Uma Maheshwara from Tamil Nadu.

Edit on 17 Oct 2017: Found one more example of Umamaheshwara. This is in Katchi Mandapam, Tiruvannamalai temple, Tamil Nadu.  Katchi Mandapam, a 16 pillared hall is past Kili Gopuram.  This Mandapam was built during the 13th century.  Photo taken by me is below.