This is Chaturbhuja Rama (four armed Rama). A very rare depiction of Rama, one of Vishnu’s avatar. The rear hands hold Shankha and Chakra, typical attributes of Vishnu. The front hands’ posture is similar to that of Kodanda Rama, holding an arrow and bow.

The forehead has vertical religious marks of Vaishnavism.  The back shows quiver reinforcing the identification as Rama.

There are few temples dedicated to Chatubhuja Rama. Ponpadarkodam in Tamil Nadu and Dhandakaranya Shetram of Bhadrachalam in Telugu speaking parts of India. The image of Utsava murti, on our left, is from Ponpadarkodam.

In Madhya Pradesh also there is a temple for Chatubhuja Rama but the temple does not have an idol. 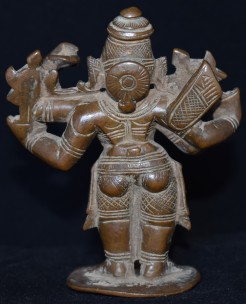 The notable features are the dagger on his right hip, overall squat and chunky appearance and extensive use of incision to mark ornaments and patterns.

The place of origin is likely to be Telugu speaking part of India. The bronze is about 10 cm in height.  There are signs of ritual use and the bronze may be from the nineteenth century or a bit earlier.

Thanks to AK for the references to Ponpadarkodam.