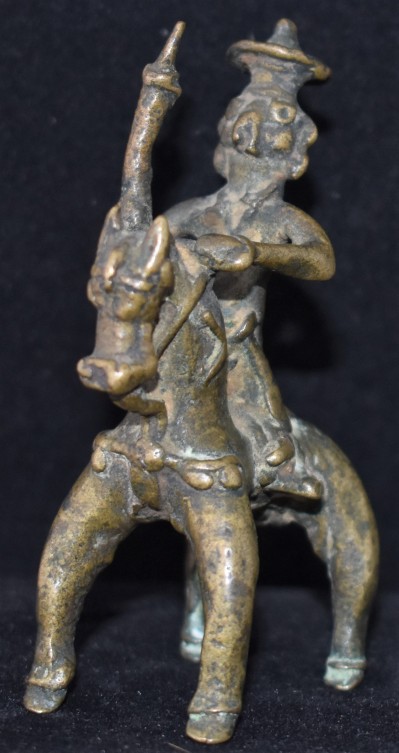 Horse riding bronzes are known from several parts of India, Revanta from Eastern India, Ayannar from Tamil Nadu, Khandobha from Western India and Bhuta figures from Konkan/Malabar coast to name some better-known examples. The bronze above is identified as Spirit Rider from Central/Western India. The identification is based on an article by Stella Kramrisch, Unknown India, Ritual Art in Tribe and Village. 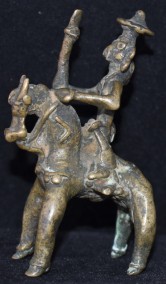 According to that article, this bronze is from Bhil Tribe in Central/Western India. It plays a central role in the last rites of death ceremony. The Spirit Rider serves as the temporary abode of the deceased soul during the twelve-day death ceremony. The ceremony is meant to help the soul on its journey to the ‘world’ beyond ours.

Here the rider is wearing a flat rimmed hat, sitting erect, holding a staff in one hand and horse’s rein in the other hand. The horse is fully equipped with rein, saddle, stirrups and decoration in the form of a chain. 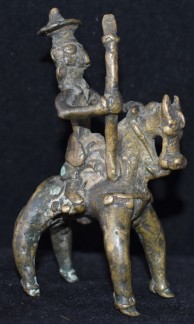 It is believed these bronzes are produced using the lost-wax method. Maybe not this one. The tail/rear portion is missing/damaged. The horse’s legs are splayed, highlighting the folkish nature of the bronze.

The Spirit Rider is about 8.5 cm in height and it is from Central/Western India. This may date to the nineteenth century.

It is interesting that despite the use of horse riding figures in the death ceremony is an integral part of the culture, Bhil tribe is not known to have or ride horses.